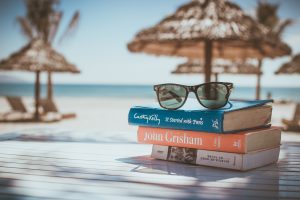 The year my girlfriends and I were turning 40, we took a long weekend to Anna Maria Island in Florida. Before the trip, my friend asked me to bring her a book that she could read; I quickly tucked a coming-of-age type story into my travel bag and handed it over at the airport. Flight went well, we landed and headed to the cottage, courtesy of our driver, Ernie. At some point before the end of the evening, Kim realized she had left her book on the plane.

The next day, we headed over to one of the piers of the island and stopped at a couple of little shops along the way. One of the stores had a small bookshelf out on their front stoop with a sign that stated “Take a book, or leave one; FREE;”  and lo and behold, sitting on the top of the pile was a dog-eared copy of the same book that Kim had accidentally forgotten on the plane.

I like to think that there is a fine line between coincidence and serendipity. Sometimes what appears like a coincidence; a set of circumstances that appear to have no causal connection is tempered by a feeling; one serendipitous in nature, an element of which is hard to define. What often seems to be a stroke of bad luck, ends up to have a different meaning. Perhaps whoever found the book on the plane needed to read it; perhaps they passed it along to someone who found personal meaning in its story. Either way, it moved beyond coincidence and into the realm of the mysterious workings of the universe.

Serendipitous moments are a part of our comfort system; they feed the soul. We can chalk it up to coincidence or we can lean into the feeling that  there was something deeper in the experience, though perhaps left unexplained. By the end of the flight home, Kim had finished the book and  handed it back to me; albeit a different copy. I put it back in her hands and stated “Pass it along, this story is on its own journey.” 🙂

If you liked this post, consider subscribing. Daily advice will be delivered to your inbox; creating an anchor to your day.

7 thoughts on “The Fine Line between Coincidence and Serendipity”