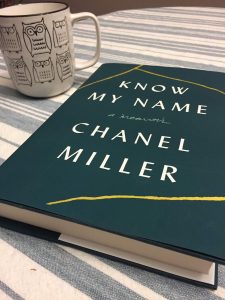 I recently wrote a blog about Chanel Miller and her appearance on Oprah’s podcast Supersoul Conversations. Now I am making mention of her book “Know My Name.” One of the best books I have read this year, Know My Name is a poignant and honest memoir of Chanel’s experience as the victim in the “Stanford Rape Case” of 2015.

Known to the world as Emily Doe, we become privy to her experience from the moment she woke up in a hospital room with pine needles in her hair, abrasions on her body and no recollection of what happened to her. We travel with her throughout the next year and a half of Brock Turner being charged, her finding out what happened to her in the news, having to tell her loved ones, and experiencing the damaging effects of victim blaming. We are with her through her harrowing court days, the relief she feels when Turner is found guilty of all three charges (unanimously by all 12 jury members), only to granted a ridiculous sentencing by the presiding judge.

During this time, we hear that one way that Chanel coped was to listen to her mother’s stories of growing up in China during the Cultural Revolution:

“When I listened to her, I understood: You have to hold out to see how your life unfolds, because it is most likely beyond what you can imagine. It is not a question of if you will survive this, but what beautiful things await you when you do. I had to believe her, because she was living proof. Then she said ‘Good and bad things come from the universe holding hands. Wait for the good to come.’ “

With Chanel’s permission, her victim impact statement as Emily Doe is released to the press and it goes viral. Emails are forwarded, bags of letters get delivered to Chanel and she begins to receive the unwavering and uplifting support that was due to her from the beginning. She notes:

“I began to see the world through a softer filter. If somebody honked at me in traffic, I thought, ‘Maybe you have cried for me’. In crowded lines at the grocery store, I wondered if the woman in front of me had written a letter, if she’d shared with me her hidden grief. When I left the courtroom that June day, after reading my statement, courage was the farthest thing from my mind. Now I understood that in this life I’ve been given, I had done something good, created power from pain, provided solace while remaining honest about the hardships victims face. In turn, they showed me who I was.”

Chanel’s faith in sharing her identity with us is further evidence that we can hold fear in one hand and courage in the other. If you only read one book this year, make it this one 🙂

6 thoughts on “Know My Name by Chanel Miller; a worthy read”