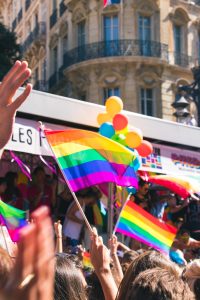 When I was in high school (the late 80’s in a small, rural town), no one in my graduating class was gay. CORRECTION: no one in my high school class would have felt supported enough to authentically identify and live as gay, bisexual or trans. Although I like to think that based on friendship, we would have been accepting, society at the time hardly encouraged it, and coming out would have been too frightening of a prospect.

Let’s face it; history has never been that straight. Today we are more progressive and less tolerant of hate – although as a society we still have a lot to work on. It warms my heart to see that many of my daughter’s friends have felt safe enough to come out during their time in high school, and to have felt accepted.

As a way to lead with love, and to be respectful of the LGBT community, let’s begin by becoming familiar with some terms and definitions:

What the Letters Mean:

Lesbian: A woman who is physically, romantically and/or emotionally attracted to other women.

Gay: A man who is physically, romantically and/or emotionally attracted to other men.

Bisexual: An individual who is physically, romantically and/or emotionally attracted to men and women.

Transgender: An inclusive term for people whose gender identity and/or expression differs from the sex they were assigned at birth.

Transsexual: A person who experiences a mismatch between the sex they were assigned at birth and the sex they identify as being.

Queer: In the past, queer was a derogatory term, but now some LGBT people use it to describe themselves and their community; others still consider it offensive.

Questioning: People still in the process of exploring their sexual identity who are not ready to apply a label to themselves.

Two-Spirit: is a cultural identity used by some indigenous people who have both masculine and feminine spirits.

Ally: Is a straight person who supports queer and trans people.

Asexual: is a person who generally does not experience sexual attraction (or very little) to any group of people.

Cisgender: is a person whose gender identity matches society’s expectations of someone with their physical sex characteristics

Closeted: is a term to describe someone who is keeping their sexuality or gender identity a secret from people

Out: Being out about your sexual orientation and/or gender identity

Outing: Revealing a person’s sexual orientation without their permission.

Pansexual: is a person who experiences sexual, romantic, physical and/or spiritual attraction for members of all gender identities and expressions.