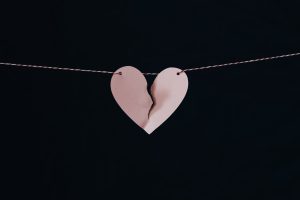 Continuing from yesterday’s post, today we look at Marianne Williamson’s spiritual teachings of what she calls Level 2 relationships:

“The second level is a more sustained relationship, in which, for a time, two people enter into a fairly intense teaching-learning situation and then appear to separate. During their time together, they will go through whatever experiences provide them with their next lessons to be learned. When physical proximity no longer supports the highest level of teaching and learning between them, the assignment will call for physical separation. What then appears to be the end of the relationship however, is not really an end. Relationships are eternal.” – Marianne Williamson, Return to Love.

When I think about this level of relationships, it helps me to understand my own situation, in my separation from my ex-husband after 23 years. A portion of my grief was in what I considered to be a failure of a sacred union. Marianne Williamson’s description has helped me to understand that the lessons I learned from my marriage make the relationship a success. She goes on to say:

“Now it may be time for physical separation so that more can be learned in other ways. That not only means learning elsewhere, from other people; it also means learning the lessons of pure love that comes from having to release the form of an existing relationship.” – Marianne Williamson, Return to Love