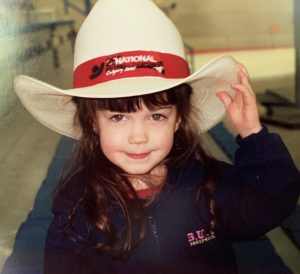 “What lesson have you learned from being a parent?”

When our oldest daughter was two and a half years old, we moved her from a crib to a toddler bed. A cute, little bed that was perfect for her – and that is when her sleeping issues began. I don’t know if it was leaving the safety of the crib (although that is my best guess), but night after night, I would eventually hear her little feet tromping into our room to tell us she was scared.

Although taking her into bed with us would have solved the issue, for several reasons, we did not go that route; a) we slept in a 3/4 bed, b) her dad was an extremely light sleeper and c) I worried about long term effects for her. Eventually, we settled on a system – she would go to her own bed and fall asleep (with one of us checking on her every ten minutes until she was out), then when she woke up she would come to my side of the bed where there was a little cot set up. She would wake me (that was her non-negotiable), and she would settle on to the cot – my hand draping over the bed to hold hers until she managed to fall back asleep. This went on for several years – eventually her sister was able to begin sleeping with her and although she still had fears at night, at least the cot was put away.

There was no doubt in my mind her fears were real. We never did manage to figure out what she was afraid of, nor what triggered the sudden change. There were times when my patience was low and I would get cross with her – and I would immediately feel bad, as I could see that getting angry or impatient did nothing to make the situation better; if anything it added to her fear.

Perhaps the biggest lesson that I have learned from being a parent was that I let my own worries dictate my impatience. It was my fear that this wouldn’t resolve itself quickly enough, my fear that somehow we had caused this, my fear that we weren’t good parents, my fear that anxiety would ‘plague her for life.’ (As you can see, like any worries, mine grew out of proportion.)

I can look back now and know that it was all okay. That it didn’t matter how long it took, or that we didn’t get it perfectly right – that what did matter was the consistent manner in which we plodded along, providing a sense to her that no matter what, we would be there at 2 am to hold her hand.

I have learned that I won’t always have the answers as a parent, but that I can have faith in the underlying principles of love and attachment. My faith has moved into knowing that ‘everything will work out’  and as a result, I act much more quickly to put my worries to bed. 🙂