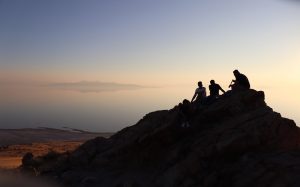 Dr. Paul Stoltz has developed the concept of the A.Q. – Adversity Quotient. Similar to our E.Q. (Emotional Intelligence), Dr. Stoltz proposes that our AQ is our ability to endure setbacks and is defined as the “hardwired pattern of response to any and all forms of adversity.”

Although he notes that our AQ tends to develop in childhood; and therefore can often present itself as an unconscious response to hardship, he also maintains that it isn’t fixed. Let’s start by examining what Dr. Stoltz has defined as three positions we take in life: quitters, campers and climbers.

Quitters: tend to give up easily. Minor difficulties can seem overwhelming and often become blown out of proportion. Quitters also have the tendency to blame others for their misfortune and will tend to stay stuck in their complacency.

Campers: are those who have reached a plateau to to speak. Although campers are ahead of quitters, they tend to have “camped” in their position to adversity. When tired, they may lean into blaming others, or they will begin to see adversity as a cumulative process versus separate experiences that come our way and need to be dealt with.

Climbers: tend to be the most resilient of the bunch. They treat adversities as separate experiences, focus on what they can control in the situation, and have the underlying belief that they can either negatively or positively impact the experience with their attitude.

Because Dr. Stoltz maintains that our AQ can be measured and that it isn’t a fixed entity, he proposes that we can work towards becoming a climber. Tomorrow’s post will examine what he calls the CORE principles that we can lean into when building resilience.

To listen to a very short clip on the definition of AQ: https://www.youtube.com/watch?v=WfHzjkLtQGM

1 thought on “What is our AQ and Why does it Matter?”